Halal  is Arabic for lawful or legal. Halal constitutes everything that is permissible for Muslims according to Islamic Law. The most common thing that halal refers to is food — especially for meat, but it goes for everything which must be according sharia law!

In relation to meat they speak about “dhabihah”.  According to some Islam-sholars, before an animal is slaughtered the head of the animal must be aligned with the qiblah (Ka’aba, Mecca). In addition to the direction, permitted animals, should be slaughtered upon utterance of the Islamic prayer ‘Bismillah’ “ = in the name of Allah. The slaughter must be performed by a Muslim. The formula can also be “Bismillah IR-rahman IR-rahim”  or  “Bismillah Allah akbar”. click  In this way Halal meat and Halal products are offered to their god called Allah and this god has nothing to do with the God of the Bible, My Father. It became an pagan offering. (everything other than the God of the Bible is pagan).

To let every Muslim know they are buying halal products, they use the following halal-mark which has many variations: 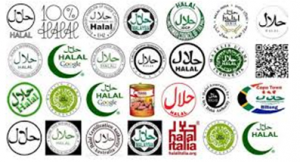 THIS MEANS, THAT A PRODUCT WITH THIS SYMBOL IS OFFERED ACCORDING ISLAMIC SHARIA LAW TO  ANOTHER GOD THAN THE GOD OF THE BIBLE.


WHEN SOMETHING IS DEDICATED TO A GOD, OTHER THAN MY FATHER, YOU MUST STAY AWAY FROM IT. 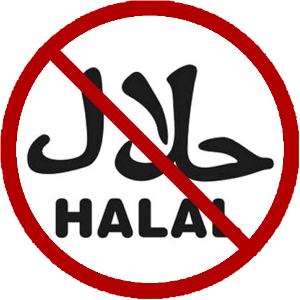 Remember My supper (The Lord’s Supper): I told you to do this to my remembrance. Eating the bread is a confession to be one with My flesh. Drinking the wine is a confession for taken part in My Blood which was shed for your sins.  Food to express oneness.

In the same  way:  when you eat food that is assigned and dedicated to an pagan god, you become one with this so called god. Your body is a temple of the Holy Spirit of God. How can the Holy Spirit live in you, when you dedicated your body to demons? How can you expect Me to live in you, when your body belongs to demons? When The Holy Spirit is NOT in you, you won’t grow in faith, because The Holy Spirit IN you, is the only One Who can make you acknowledge the gospel en know the ways of God The Father. Without The Holy Spirit you are weak and influenced by the evil one. For people who eat these kind of food (not only halal products but all other offered food from other religions like, Hinduism and shamanism) it is difficult to believe the gospel, because the evil one in them creates a barrier to accept the gospel. Christians who eat this kind of food, knowingly or unknowingly, become more and more less vigilance in faith and going astray because, The Holy Spirit isn’t there to lead them, to give them insight and to protect them against influence the evil one.

14 Therefore, my dearly beloved, shun (keep clear away from, avoid by flight if need be) any sort of idolatry (of loving or venerating anything more than God).
15 I am speaking as to intelligent (sensible) men. Think over and make up your minds [for yourselves] about what I say. [I appeal to your reason and your discernment in these matters.]
16 The cup of blessing [of wine at the Lord’s Supper] upon which we ask [God’s] blessing, does it not mean [that in drinking it] we participate in and share a fellowship (a communion) in the blood of Christ (the Messiah)? The bread which we break, does it not mean [that in eating it] we participate in and share a fellowship (a communion) in the body of Christ?
17 For we [no matter how] numerous we are, are one body, because we all partake of the one Bread [the One Whom the communion bread represents].
18 Consider those [physically] people of Israel. Are not those who eat the sacrifices partners of the altar [united in their worship of the same God]?
19 What do I imply then? That food offered to idols is [intrinsically changed by the fact and amounts to] anything or that an idol itself is a [living] thing?
20 No, I am suggesting that what the pagans sacrifice they offer [in effect] to demons (to evil spiritual powers) and not to God [at all]. I do not want you to fellowship and be partners with diabolical spirits [by eating at their feasts].
21 You cannot drink the Lord’s cup and the demons’ cup. You cannot partake of the Lord’s table and the demons’ table.
22 Shall we thus provoke the Lord to jealousy and anger and indignation? Are we stronger than He [that we should defy Him]?

Halal is a derivative of the Hebrew word “helel”  click meaning Lucifer/Satan. Some cultures (Turkey) speaks it just like that!

If you belief in Me, ask yourself, is it OK to eat something with a reference to Satan or dedicated to Satan himself?

When you are in a restaurant, you don’t have to ask the cook if the meat is halal or not. You can eat any where you want, as long  as you speak My blessing over it  and they make it explicit know to you through displayed halal signs or halal certificates !!!.

Prayer and calling My blood over everything is essential  in a Christians live.

Without this blessing you will contaminate yourself with the evil one. Study 1 Corinthians 10:24-33. This conquering power is not a permit to eat everywhere improvidently. You knowledge of My word must not lead some one with less knowledge (weaker in believe) into sin, because he/she  sees you doing it. These “weaker” brothers were not yet free of the religious connotation that meat carried. Therefore, a “stronger” brother indulging in meat-eating could entice the weaker into an action that he believed was wrong, and was therefore sin (Rom 14.23" data-version="esv" data-purpose="bible-reference">Romans 14:23). Another believer’s walk in faith must not be weakened through your example.

It doesn’t become an issue until the restaurant of seller brings it up. If they bring it up with displayed halal signs or halal certificates don’t eat meat there. If you the halal sign on product don’t buy it.

7 Nevertheless, not all [believers] possess this knowledge. But some, through being all their lives until now accustomed to [thinking of] idols [as real and living], still consider the food [offered to an idol] as that sacrificed to an [actual] god; and their weak consciences become defiled and injured if they eat [it].
8 Now food [itself] will not cause our acceptance by God nor commend us to Him. Eating [food offered to idols] gives us no advantage; neither do we come short or become any worse if we do not eat [it].
9 Only be careful that this power of choice (this permission and liberty to do as you please) which is yours, does not [somehow] become a hindrance (cause of stumbling) to the weak or over-scrupulous [giving them an impulse to sin].
10 For suppose someone sees you, a man having knowledge [of God, with an intelligent view of this subject and] reclining at table in an idol’s temple, might he not be encouraged and emboldened [to violate his own conscientious scruples] if he is weak and uncertain, and eat what [to him] is for the purpose of idol worship?
11 And so by your enlightenment (your knowledge of spiritual things), this weak man is ruined (is lost and perishes)—the brother for whom Christ (the Messiah) died!
12 And when you sin against your brethren in this way, wounding and damaging their weak conscience, you sin against Christ.
13 Therefore, if [my eating a] food is a cause of my brother’s falling or of hindering [his spiritual advancement], I will not eat [such] flesh forever, lest I cause my brother to be tripped up and fall and to be offended.

If the restaurant is telling you beforehand, through Halal signs as given above: this is a halal restaurant or product.

Don’t go there , don’t buy there and don’t eat there, because it would be a deliberate choice to eat offered food products and, it could  encourage other (weak) believers to eat or buy Halal also.

Be Holy as I AM HOLY.


I have warned you NOT to take MY name in vain!!

7 You shall not use or repeat the name of the Lord your God in vain [that is, lightly or frivolously, in false affirmations or profanely]; for the Lord will not hold him guiltless who takes His name in vain.

Exodus 20:7 (NKJV Study Bible Notes) 20:7 The third commandment concerns the sanctity of God’s name (see 3:14, 15). The revelation of God’s name, Yahweh, entailed some risk. If it was broadcast among the people there was more likelihood that people would not hold it in reverence. Use of God’s name in vain involved: (1) trivializing His name by regarding it as insignificant; (2) trying to use it to advance evil purposes by coaxing God to violate His character and purposes (one of the ways priests of false religions often used the names of their false gods); and even (3) using it in worship thoughtlessly.

ALTHOUGH A BORN AGAIN CHRISTIAN IS NOT UNDER THE LAW ANYMORE, HE STILL HAS TO LIVE ACCORDING THE LAW. DON’T BE DECEIVED IN THIS ALSO.

I HAVE FULFILLED THE LAW FOR YOU,…. NOT TO GIVE YOU A LICENCE TO SIN FREELY.

There will be a time when nobody will able to buy or to sell with-out a mark of the beast on it. This halal-mark is a forerunner for what is to come. Take notice of the word “Bismillah”  in image 2, compare this with the Islamic-prayers mentioned above and see the resemblance (in shape) with Greek words from Revelation 13:17.  Study and investigate this mark of the beast further. It’s NOT a meaningless number (666) leading people astray, but an emblem of the beast! The Greek character in the manuscript wasn’t meant to be translated. When apostle John saw this mark of the beast, he couldn’t  place it. In his time the Quran and Arabian calligraphic art didn’t  exist yet. Because the mark of the beast resembles the Greek character “XI”, he literately wrote down what he saw (image 3). 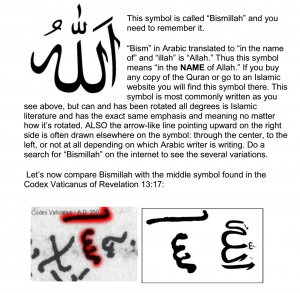 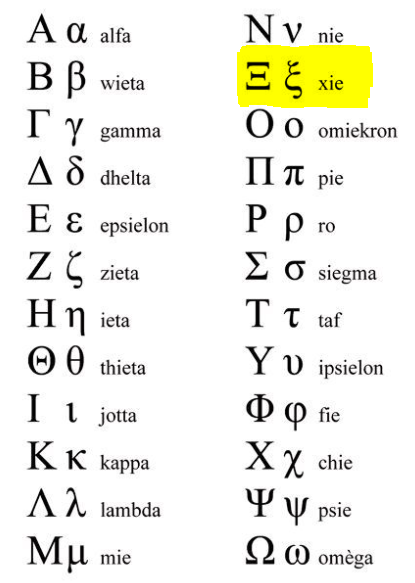 Be prepared the time is near,

I will come suddenly.